Events in Jackson, Memphis, Knoxville, Chattanooga, and Nashville coming up!

Are you looking for ways to get involved?  We've got lots of events around the state coming up for you.

February 8--Memphis--TEP Gumbo Contest.  4:30 at Bridges Center.  To get tickets and learn more, go to this link.

February 16--Nashville--Panel discussion on domestic violence in the LGBT community.  6:15 at OutCentral.  To learn more and RSVP, go to this link.

March 10--Nashville--TEP's 11th annual Advancing Equality Day on the Hill.  9:00 a.m. at Legislative Place.  To learn more and to RSVP, go to this link.

We hope that we'll see you soon at an event near you.  If you would like to support our work with a small monthly donation, you can do so at this link.

Here's a roundup of the media coverage of last night's marriage equality events in Knoxville and Nashville.

Knoxville:  The Knoxville rally took place at the Sunsphere and was covered by WATE at this link.  Here are some photos of the event linked from Twitter.  For more Twitter posts, look for the tag #NotDoneTilDayOne . 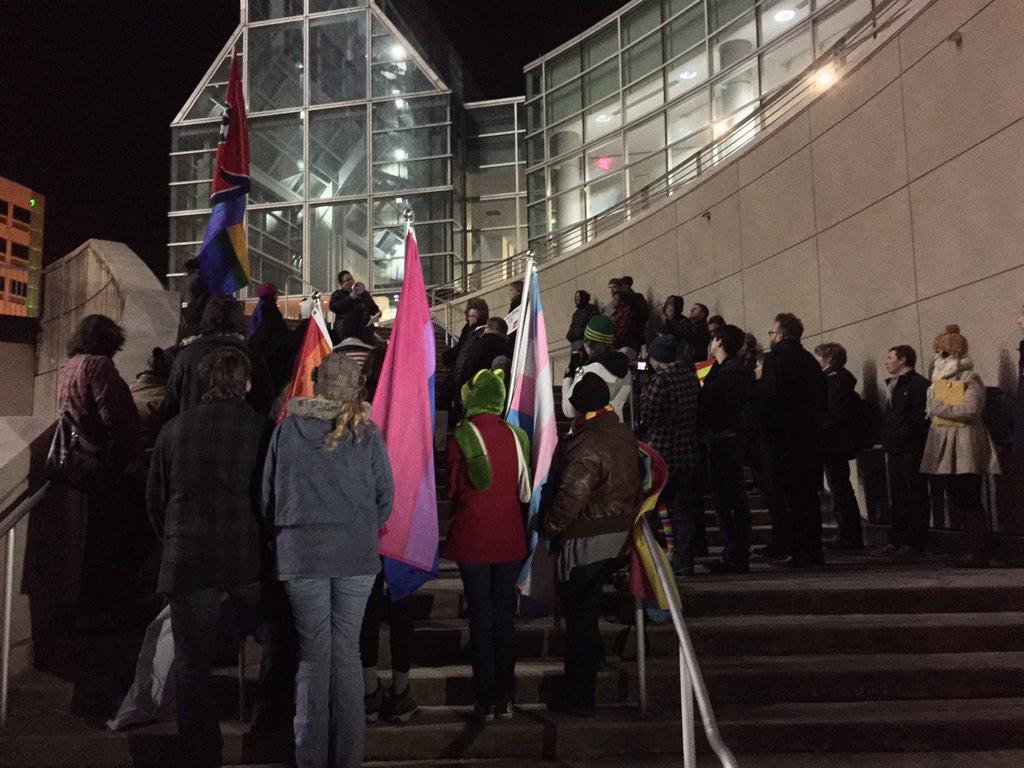 An image of Abby speaking to the group

It was a great evening around Tennessee.  Even though the Supreme Court has not yet decided to take up our state's case, we are hopeful it will happen next week.  We are ready for DAY ONE.

Nashville, TN:  The Tennessee and other same-sex marriage cases will be considered during Friday's Supreme Court conference.  Marriage equality advocates will gather at Knoxville and Nashville events to express their hope that the high court takes up the Tennessee case.

The Knoxville event takes place at the Sunsphere at 7:00 p.m. Eastern Time.  For more information about the event, go to https://www.facebook.com/events/1526864450905906/ .The Nashville event takes place at 6:30 p.m. Central Time at OutCentral located at 1709 Church Street.  For more information about the Nashville event, go to http://tnep.nationbuilder.com/nashville_marriage_update_after_the_supreme_court_conference .

"Thousands of people across Tennessee are ready to enjoy the same rights and responsibilities as other married couples," notes Tennessee Equality Project executive director Chris Sanders.  "We hope 2015 is the year that finally happens.  These gatherings are a way to provide information to our community about the Supreme Court's conference and to show the public that we still live with discrimination."

Both events are free and open to the public.

For more information about the Tennessee Equality Project, go to TNEP.org .

Tennessee businesses don't want to Turn the Gays Away

Businesses all over Tennessee are signing up for Equality Means Business.  In fact, so far almost 80 have and you can find their

names at this link.  That means they don't want to discriminate against gay, lesbian, bisexual, or transgender employees and customers.  And that means that they're not looking for a license to do so from the Legislature.

Still, there's a strong possibility that the bill that plagued us this year will be back in 2015.  To prepare, we hope you'll RSVP for TEP's 11th annual Advancing Equality Day on the Hill.  You can do that here.

If it comes back, we'll fight the bill with everything we have.  But if it passes, we're going to continue to expand Equality Means Business because we want to know where our business and where our job applications are welcome.

If your business would like to join the program, you can do so at this link.

There are at least two ways to read the phrase "consenting adults," and I think it matters which approach we take.  First, there's the breezy approach to the phrase and that can be either mocking or light.  Social conservatives mock the phrase sometimes as an "anything goes" approach to sexuality.  But others sometimes use the phrase in a joking manner, too, as in "Hey, whatever consenting adults choose to do..."  A chuckle is supposed to follow the "..."

But there's another way to read the phrase and I'm influenced by being an ally of the bisexual community where there is a great deal of discussion of sexual assault.  In fact, I think you can't miss the discussions of sexual assault in any forum focused on the bisexual community.  After spending a great of time learning all I can to be a better bi ally, I think the way to read the phrase is "consenting [long pause] adults."

Why the long pause between the two words?  The long pause brings to bear the struggle of victims of sexual assault and the long, sad history of using sexuality for neither love nor pleasure but for violence.  It is a reminder that sexual assault affects every community, particularly gender and sexual minorities.

"Consenting adults," given that history, is not some libertine phrase.  It is the antithesis of abuse and assault and coercion and force.  It isn't "anything goes" and it isn't fodder for jokes.  It is basic to any real sexual and interpersonal ethic.

Consenting...adults--let's give it the joy and dignity it deserves!

Events in Nashville, Memphis, Knoxville, and Jackson this week

TEP has events for you around Tennessee this week.  We hope you will join us for fellowship and the purpose of advancing equality.  We'd love to see you.  Take a look at some of these options as you put your calendar together.

Looking Back: Preparing for DAY ONE of Marriage Equality

The NCLR and the Tennessee attorneys advancing our state's marriage case are doing a great job.  They have petitioned the Supreme Court and now we wait.  But waiting around with nothing to do is definitely NOT how we spent 2014.

We prepared for three outcomes.  1.  We prepared for a generally positive ruling, which would require an additional legal challenge to bring marriage equality specifically to Tennessee. We worked with attorneys to identify plaintiffs across the state in case they were needed.  2.  We prepared for a sweepingly positive ruling that would have directly brought marriage equality to Tennessee through our Tennessee Ready for Marriage on DAY ONE program.  In August and September we held trainings in Knoxville, Johnson City, Cookeville, Collegedale, Nashville, Memphis, and Murfreesboro engaging hundreds of people.  The only program of its kind in the country, our preparations were profiled by the Equality Federation at this link.  3.  Finally, we prepared for the temporary loss in the 6th Circuit with rallies in Memphis, Jackson, Nashville, Cookeville, Chattanooga, and Knoxville that ended up engaging more than 300 people across the state and received extensive media coverage, which you can find at this link.

It is not easy with a full-time staff of one person to prepare for every possible outcome, but with your support and the support of volunteer leaders around the state, like the group from Memphis pictured below, we did it.  When you pledge today to support the TEP Foundation on December 2 for Giving Tuesday, you make sure we are ready to advance equality no matter what the courts or the Legislature throws at us.  You can schedule your Giving Tuesday contribution to the TEP Foundation at this link today and it will count on December 2!

Why is this program necessary?  With no prospects for a comprehensive LGBT-inclusive civil rights law related to employment, public accommodations, and other concerns at the federal or state level, we must persuade more businesses large and small to become inclusive in Tennessee.  Engagement with business brings important allies in the fight for equality in our state.  Pictured below is Joelle Phillips, president of AT&T Tennessee, accepting the Champion of Equality award for her company at this year's Olympus at the Parthenon in Nashville.

When you make a pledge to support the TEP Foundation on Giving Tuesday (December 2), you help us grow this important program.  You can use this link to schedule your Giving Tuesday contribution today and it will count on December 2.

TEP has long included bisexual board members and concerns, but we increased our efforts to include bisexual people in 2014.  We included more bi content in our Facebook and Twitter feeds and added two bisexual members to our TEP Nashville Committee leadership team.  That led to a public program on Bi Visibility, Stereotypes, and Erasure, which provoked some transformational discussions.  In addition, we are assisting the LGBT Carson-Newman Alumni in rallying support for Cassie Hopkins, a bisexual woman who has has been dismissed from volunteering with Yoke Ministries in Jefferson County.  You can read more here.

TEP is committed to being a bi-positive organization.  Your support of the TEP Foundation on Giving Tuesday (December 2) makes it possible for us to do more.  Please, consider scheduling your Giving Tuesday contribution at this link today and it will count on December 2.

Looking Back: SAFE Tennessee because Schools Are For Everyone!

We've done a lot of safe schools/anti-bullying work over the years, but we upped our game in 2014.  As well as spending a lot of time working with citizens in Rutherford County to help them engage their school board, we also launched SAFE (Schools Are For Everyone) Tennessee in East Tennessee.

Ryan Hood, the program coordinator, is developing outreach to help communities deal with cases of bullying, assist GSAs, and engage their school boards.  Consider pledging today to support the TEP Foundation on Giving Tuesday (December 2) at his link, where you can schedule your contribution in advance.