This morning an ally alerted the Tennessee Equality Project to this Chattanooga Times Free Press story that broke yesterday about a Copper Basin High School student taking her life in connection to the bullying problem at the Polk County school.  The same paper covered another student taking his life earlier in the year, a case that may have also been connected to bullying.  In the first case, there was an investigation in which the findings were to be turned over to the Polk County Sheriff.  In the second case, the school is admitting there is a problem.

What we've done:  The TEP SAFE (Schools Are For Everyone) Tennessee program has been in touch with an assistant principal at Copper Basin High.  We left a message with some resources and a request to discuss the matter.  I hope we'll hear back from the school. 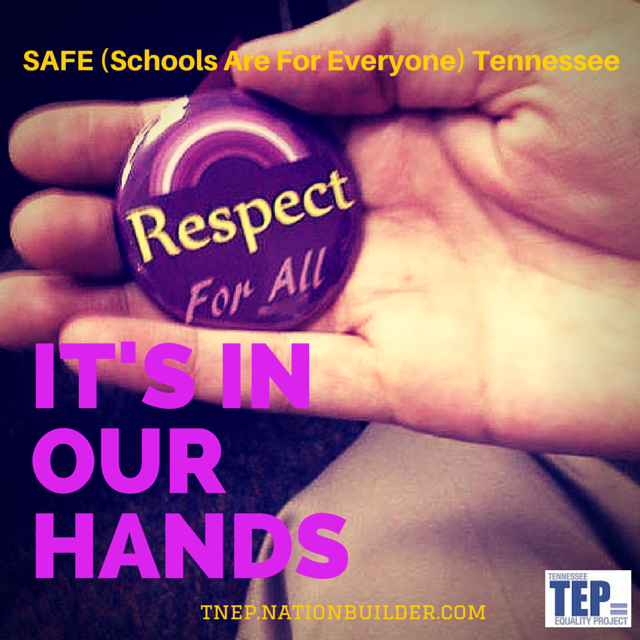 What do we know about Polk County Schools and bullying leading up to these two incidents?  Not much, but there is some data reported to the Tennessee Department of Education.  In the 2014 bullying compliance report, there were 37 reported cases of bullying in the district (not limited to Copper Basin High School) and 20 confirmed.  There were zero pending or unresolved cases at the end of the year, according to the report.  In the 2013 report, there were 23 reported cases, 20 confirmed, and zero pending at the end of the year.  The pending section of the report was left blank, so I am assuming the number is zero.  We can say that either the numbers rose over the last year or that the school system did a better job of reporting incidents.  The district says it serves 2800 students.

The Positives:  Here's what we can say on the positive side.  The district reports its numbers to the State.  Some districts report zero cases of bullying, which no one should find credible.  Second, based on media reports previously cited, there have been efforts to provide anti-bullying training to school personnel.  Third, the school leaders are admitting there is a problem at Copper Basin High School.  Having worked in situations in which a district would NOT admit a problem, such as Cheatham County in 2012, it's a constructive posture.

Reaching out:  We are hopeful that the school system will conduct a thorough investigation, as it says it is doing.  Bullying reports need to be addressed promptly.  We will continue to try to be in dialogue with the school system.  If you live in Polk County, please, contact us at [email protected] .  We would love to have your perspective.