The news from the latest Vanderbilt poll is not good.  Support for marriage equality is down compared to November 2014 in 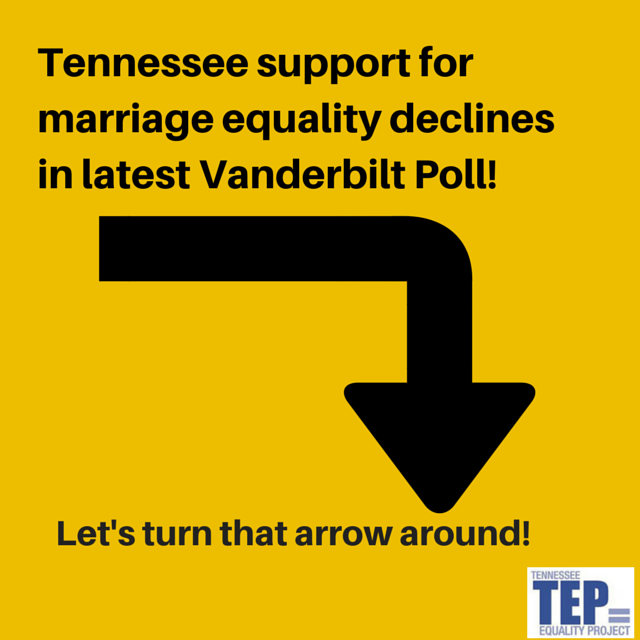 Tennessee.  You can find the full poll results here.  Questions 13, 14, and 15 are relevant for the work of advancing equality in Tennessee.  While it may be true that support is rising nationwide, we seem to be losing support as the Supreme Court decision approaches.  Fortunately the Supreme Court doesn't rely on polls.

In question 14 on full marriage rights, civil unions, or nothing, respondents broke down as follows:  27% for marriage, 22% for civil unions, and 48% for no legal recognition.  In November the numbers were 32%, 25%, and 39%.  A very disturbing trend considering the November numbers were so good.

Question 15 asked about wedding vendor refusal legislation or a mild form of RFRA/Turn the Gays Away-style bills.  57% said businesses should be allowed to refuse services for same-sex couples.  38% said they should be required to provide services.

While the Supreme Court may not rely on polls, we have to live with our neighbors who don't support us...YET.  We have to win acceptance so that our community can be safer and thrive.

Tennessee Equality Project's Summer of Love tour around the state will help us reach smaller towns in Tennessee where acceptance is still low.  Click here to fuel the tour.