Victory for now in Blount County, but the organizing continues 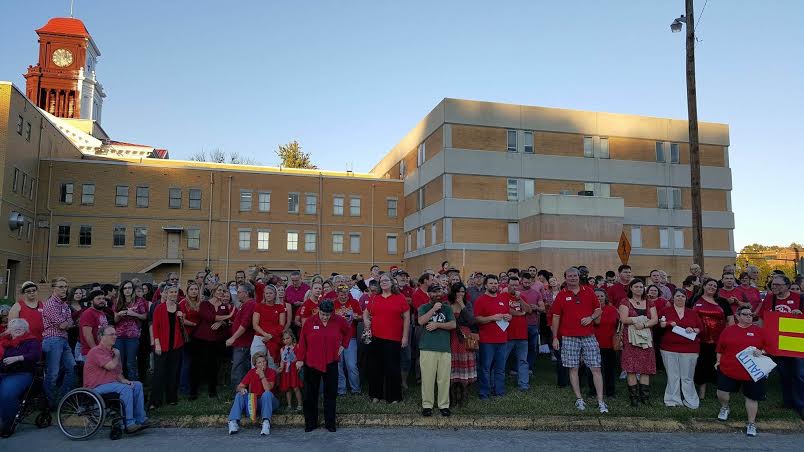 Maryville, TN--The army in red scored an important upset victory on Tuesday as the Blount County Commission failed to take up a resolution asking to be spared God's wrath and asking Tennessee leaders to defend "natural marriage."

Over 200 marriage equality advocates showed up to protest the resolution.  They never had to say a word, though, because after failing to adopt the agenda, which included the anti-marriage equality resolution, the commission abruptly adjourned the meeting.

TEP Knox, Anderson, and Blount Counties Committee Chair (and TEP Foundation Chair) Gwen Schablik told the Knoxville News Sentinel, "But for now, we’re definitely organizing and continuing and watching, watching to see what they do. And we’re not going to give up.”

The sponsor, Commissioner, Karen Miller, vows to bring the resolution back.  TEP and our allies such as PFLAG Maryville will also be back to fight the measure that garnered significant national attention.

Continuing the Fight:  Immediately upon learning about the resolution, TEP leaders sprang into action and organized people to attend the meeting, engaged media outlets, helped citizens contact members of the County Commission, and prepared remarks to be used at the Commission meeting.

YOUR tax deductible contribution to the TEP Foundation makes it possible to teach organizing skills to the LGBT and ally community throughout the state and it helps us advance the values of equality and inclusion in the media.  Click here to make your contribution NOW.

More Coverage:  For a sampling of other coverage of the historic Blount County Commission meeting, go to these links:  WBIR,  Chattanooga Times Free Press/AP, Reuters, The Daily Times (Maryville), and WATE.