Introduction:  The Tennessee Equality Project’s previous local government advocacy agenda was a guiding force in our work between 2007 and 2014.  It influenced TEP PAC’s candidate endorsement process and our lobbying of local governments, thus helping to shape the discussion of non-discrimination and partner benefits ordinances around the state.  Achieving those successes, seeing other pressing needs, and acknowledging the important elections this year in Memphis, Knoxville, Nashville, and other cities make it clear that the time has come to announce a bold new advocacy agenda for the coming years.

Policy and advocacy objectives of necessity exist at the crossroads of what a community needs and what is possible to advance.  The goals presented are not exhaustive, but they are among those that we consider attainable through the cooperative effort of citizens and local governments in Tennessee.

In this spirit, the Tennessee Equality Project offers for the public’s consideration these elements of our new advocacy agenda for cities and counties throughout the state.  As more local governments  include the categories of sexual orientation and gender identity in their ordinances, we see an opportunity to make sure that these cities serve other basic needs of their gay, lesbian, bisexual, and transgender inhabitants.  We invite all people of good will in Tennessee to consider the following:

I. Domestic Partner Registries.  If the United States Supreme Court does not rule in favor of marriage equality for Tennessee, it will be many years before the State Constitution extends equal marriage to same-sex couples.  Until that time, Tennessee cities and counties must do what they can to protect same-sex couples.  The City of Atlanta, for example, maintains a domestic partnership registry for all residents of the city and city employees.  It may also be possible to explore a registry that includes anyone who works in a particular jurisdiction.  The certificate of domestic partnership is accepted by many private employers as proof of a relationship for the company’s own domestic partner benefits programs.  For more information on Atlanta’s approach, go to http://www.atlantaga.gov/index.aspx?page=1087 .

II.  Safe schools.  Only Knox County, Metro Nashville, Putnam County, and Shelby County school districts include sexual orientation and gender identity in their non-discrimination/anti-bullying policies.  We continue to advocate the inclusion of gender identity, gender expression, sexual orientation, disability, and other factors in school district policies across the state.  In addition, we will look for opportunities to help school districts incorporate LGBT competency training for administration and faculty and make them aware of the federal Equal Access Act to create a space for Gay/LGBT-Straight Alliance clubs in schools.

III. Gender transition/gender confirmation healthcare for city or county government employees.  Many people commonly think first of surgery when this topic comes up in conversation.  Gender related healthcare is a broader topic that relates to all the options that help transgender people live in their true gender.  Healthcare issues pertain not only to the initial stages of transition.  If a new  employee of a city or county government has already transitioned, other health care needs exist.  Employee insurance programs in local governments should include these needs.

IV.  Building relationships with local law enforcement and district attorneys across the state to address hate crimes and domestic violence.  The persistence of hate crimes, a national outbreak of violence against transgender women, and alarmingly high rates of domestic violence in the LGBT community call for closer relationships between advocacy organizations, local law enforcement agencies, and district attorneys.  These relationships can help achieve justice for victims and safety for survivors as well as help build support for state legislation and policy advances that adequately address these issues.

V.  Funding for youth transitional housing.  LGBT young adults (18-24) have few options when they become homeless.  Many private solutions may not be fully inclusive and may even be hostile to LGBT people.  Local governments cannot require the private sector to serve inclusively of the LGBT community in Tennessee because of a 2011 state law.  But they can expand their own funding and they can do more to make sure their housing authorities are applying for all available federal programs related to youth transitional housing.  This policy goal may involve, for example, setting a target for a certain number of transitional housing units within a jurisdiction.

VI.  LGBT-friendly affordable housing for seniors.  More cities like Chicago are looking at LGBT-friendly affordable housing options for seniors. See this article for information http://www.usatoday.com/story/news/nation/2014/10/06/chicago-minneapolis-philadelphia-senior-lgbt-housing/16115641/ .   The first generations of LGBT people who have lived most of their lives out of the closet are aging and in need of solutions.  In some cases they feel the need to go back into the closet with respect to their gender identity or sexual orientation, which is an isolating experience that leads to poor mental and physical health outcomes.  City and county governments can make sure existing HUD non-discrimination policies are fully understood and implemented by staff.  Local governments can also help their housing authorities implement LGBT senior cultural competency training for staff.  These solutions are readily available even before the discussion of dedicated units or expanded housing options begins.

VII.  LGBT-competent staff at health facilities.  Local governments across the state are involved in providing health services from hospitals to health departments and clinics to emergency medical services.  LGBT people, like all people, deserve excellence and respect when they seek services.  Local governing bodies and boards that oversee city and county health services should require personnel to improve their competency in serving the LGBT community in order to improve health outcomes.

VIII.  Dignity/Inclusion/Non-Discrimination resolutions for smaller local governments.  While it may not be possible to pass non-discrimination ordinances in smaller towns in Tennessee, local governing bodies should consider dignity/inclusion/non-discrimination resolutions like the ones passed by many towns in Mississippi.  The resolution passed by Oxford, Mississippi reads:  “NOW, THEREFORE, BE IT RESOLVED that the Mayor and Board of Aldermen of the City of Oxford declare it the policy of the City to reject discrimination of any kind and to respect the inherent worth of every person without regard to race, color, religion, national origin, sex, gender identity or expression, age, marital status, sexual orientation, family status, veteran status, disability or source of income, this the 4th day of March, 2014.”  The entire text is available at http://www.dailykos.com/story/2014/03/05/1282304/-Oxford-Mississippi-becomes-3rd-MS-city-to-pass-LGBT-euuality-resolution .  The goal of these resolutions is to inhibit discrimination and increase the safety of LGBT people in smaller towns.  It will also have the effect of showing more state officials that equality is a value cherished throughout Tennessee.

The Work Begins:  The Tennessee Equality Project has begun the work of becoming the kind of organization equipped to pursue these advocacy objectives.  We announce these goals in hopes of gaining the support of candidates and current elected officials in local governments throughout Tennessee.  But we especially publish these goals to draw more members of the LGBT community and allies into this important work.  The work ahead will be difficult because the issues are complicated and the solutions we propose require education and consensus-building.  We ask for your help as volunteers and financial supporters so we can advance these important goals together.  You can provide financial support for our local government policy work at this link . 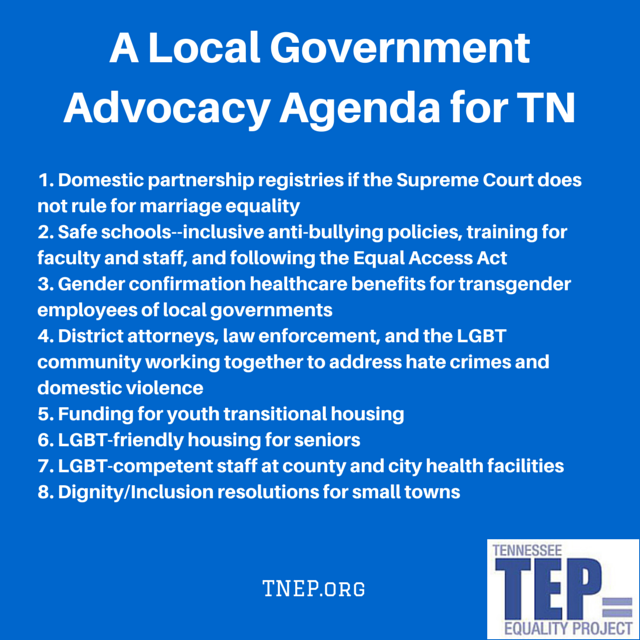